I was reading an article on the The Telegraph website earlier today about HMV banning visible tattoos and piercings for their store staff and the discussion it sparked in the comments section.  Most of the comments moved from the unification of staff appearance to the topic of body modification being a past time of layabouts, thugs and those who don’t want to work.  I’m more than a little insulted, as I suspect, would anyone else who has body modifications would be.  I’m a thirty year old with 3 small tattoos, a fourth tattoo designed and planned and I hold down a full time job whilst dealing with health issues, thank you very much you narrow minded people.  There are also people for whom tattooing is a religious and/or cultural right of passage.

For the Maori of New Zeland, there is great reverence and respect around the process of Ta Moko. Those who undergo the process wear their Moko (the finished product) with pride (my half sister’s husband being one of them).  Surrounding each tattoo, there is a ritual and a meaning and each Moko represents a specific part of that person’s particular journey.  A quick Google search will provide you with more details on the different tattoos and the meanings associated with them. The Massai people undergo ear piercing and the removal of deciduous canine teeth as part of their customs.  Tattooing, teeth sharpening or removal, ear elongations, lip plates, nose studs, neck elongation and foot binding have all been a part in various world cultures and some of these still are today.  Western society has appropriated many, but not all of these traditions and attached it’s own meaning to them whether rightly or wrongly.

For me, the tattooing of my body marks moments in my life and tells my story in a way that best represents me.  They are the markings that bring to life my story.  Currently I have three of them.  I plan on at least two more, and over time that number will likely grow.

My classic Tigger with only two stripes on his nose, denotes my childhood and the loss of innocence at a tender age, whilst also showing my love affair with AA Milne’s characters, which continues to this day.  I chose the classic Tigger out of a desire to avoid the commercialisation connotations of the Disney version of this beloved character.

My triquetra shows a point in my life where I felt connected in mind, body and spirit.  I was passing out of one stage of my life into a newer one, thus as some Pagans would say, I was experiencing a rebirth.  Each point to me represents a part of me and the circle binds those parts together.  But on another and also equally important note, the triquetra shows a respect for the Catholic and Protestant sides of my heritage.  In Christian symbolism, the triquetra represents Father, Son and Holy Ghost.

My wolf print matches but is also different from my fiancée’s.  We used the same image to create our tattoos, but unlike hers which has shading and claws, mine is the outline of the pads.  These tattoos are symbols of our longing to be together, to be a family (pack), but also our struggles and having to remain, essentially lone wolves for the time being.  For each obstacle we overcome together, I will have a pad of my print shaded in (visas, marriage, children).  One day, that tattoo will be whole and I will be able to say what each part represents.

The next tattoo I have lined up is the biggest one to date and it will take longer than the others did.  I know that those who recognise the symbols it is made of will see it as a geek tattoo, and yes they are right, but this tattoo, which I designed, is so much more than that to me.  Each of the three symbols carries its own special meaning.

The base of the tattoo is the wings from the Battlestar Galactica symbol.  This represents the struggle to find a place to call home and the desire for family.  The endless searching for that which is desired most, safety, love and security.  It also reminds me of Mary McDonnell, the actress who plays President Laura Roslin.  Mary is an eloquent and intelligent person who supports Autism Speaks and is an advocate of support and research into Autism.  This to me, means so much.  Both my niece and nephew have Asperger’s and I know the struggle my sister has had with them sometimes.

The second layer of the tattoo is the outline of a Star Trek communicator, showing the importance of the strive for a better future and the acceptance of all people regardless of differences.  It also represents the quest into the unknown and the desire for exploration.  In my case, the desire for self-exploration.  When I see the communicator, no matter where I am, it sends a flood of inspiration and reminds me of a point in my life where once again things changed. An image of Kate Mulgrew as Captain Kathryn Janeway pops into my head whenever I see a communicator.  At the time I was introduced to Star Trek Voyager, I was in a bad place.  I was unemployed and in severe pain, the pain was so bad that I was unable to move from the flat I lived in and get out and about.  My friend brought round the double episode ‘Year of Hell’ on DVD and in watching the episode and watching the way Janeway tackled all the problems she and her crew faced, I found the spark of inspiration I needed to do something about the pain and begin job hunting again.  The more I watched Voyager and the more I learnt about Kate, the more inspired I became, and when I found out that she supports Alzheimer’s research (the condition amongst others listed on my grandmother’s death certificate), the icing was on the already well baked proverbial cake.

The last symbol on the tattoo is the Earth chevron from Stargate SG-1. In SG-1 this symbolises home for the teams, and in a sense it does for me too.  But for me it’s the feeling of home.  My childhood was fraught with more issues than I care to explain right no, but the weekly ritual of an hour a week of SG-1, got me through my teen years, and in adulthood has provided me with a chosen family and a metaphorical home – in other words, a place where I belong.  Amanda Tapping, as Samantha Carter was (and still is) my role model throughout my teenage years.  She provided me with a rare gift – the knowledge that as a woman, I could be anything I wanted to , that I wasn’t limited in my choices, and she also provided an insight into a part of me that I hadn’t previously been aware of.

The simplicity of this tattoo’s lines, when inked on my skin, will hold so much more weight than being just another body modification to me.  They will represent my past, present and future.  These three symbols will be forever merged into one image that marks the presence of three amazing role models in my life and a path that has been more than a little rocky in places but that has made who I am. 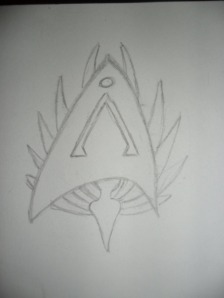 Tattooing and other forms of body art aren’t a ‘class divider’, they mark something special for the people who have them and many of us agonise over the next one for a long time before we go ahead with it.  I still have to design the tattoo that will represent my mother and her influence in my life and I keep mulling over the ideas constantly.  My journey is etched in my heart and mind, but also on my skin, as constant reminders of what has and can be.

A conundrum inside an enigma. View more posts